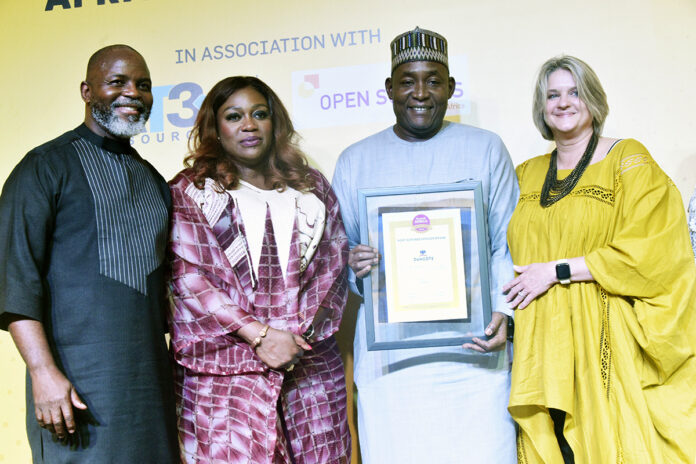 The Pan-African and fully integrated conglomerate, Dangote Industries Limited (DIL) has again emerged as the most Admired Brand in Africa for the year 2022, for its leadership position in driving quality brands across the continent.

Founder and Chairman of Brand Africa, Thebe Ikalafeng, stated that Dangote has remained a stalwart global African brand and symbolises African pride. He added that Dangote has also moved up a rank in the Top 100 most admired brands and retains its #1 Made-in-Nigeria brand rank.

Ikalafeng, giving an insight into the process of selecting the winners, said the rankings are based on a pan-African survey covering over 25 countries, which collectively account for an estimated over 85% of Africa’s population and 85% of the continent’s GDP.

According to him, “the research is conducted by GeoPoll, the world’s leading mobile surveying platform, with strategic analyses, insights and ranking conducted by Kantar, the world’s leading data, insights and consulting company and Brand Leadership Group, Africa’s foremost branding, strategic communications and intellectual property advisory firm.”

In a recent issue of the Brand Africa 100: Africa’s Best Brands rankings, Dangote and MTN retained their statuses as the most admired African brands recalled spontaneously and when prompted, respectively.

Group Chief Commercial Officer, Dangote Industries Limited, Rabiu Umar, who received the awards, commended Brand Africa for the initiative of building and promoting African brands. He expressed appreciation to the organisers and urged them not to relent in their efforts to see that brands from Africa compete favorably with foreign ones.

Umar said that Dangote has risen a notch higher as a global brand with the export of Dangote Fertiliser to many countries of the world. “People now identify with the brand and in all the countries where we operate, Dangote Cement has become a reference point,” he added.

Umar said, “To the management of DIL, the ranking was not unexpected, because the company has a long-standing reputation for quality, relevance, compliance and social stewardship. Our mission and vision engage and inspire us, and by extension connects us to both our internal and external stakeholders.

“We fervently believe that only Africans can develop Africa, and this gives us stronger sense of relevance in all the countries where we have our operations. We are touching lives by providing their basic needs and empowering Africans more than ever before, creating jobs, reducing capital flight, and helping government to conserve foreign exchange drain by supporting different industrial and infrastructural projects of African governments.”

Established in 2011, the Brand Africa 100: Africa’s Best Brands rankings are the most authoritative survey and analysis on brands and underlying businesses in Africa, based on a study by Geopoll across 29 countries spanning all the five economic regions.

An analysis of the data over the past 10 years, has established that on average, slightly over 20% of the brands admired by Africans are made in Africa.

Jaajo: My Music Is Focused On Promoting Africa

Jaajo: My Music Is Focused On Promoting Africa