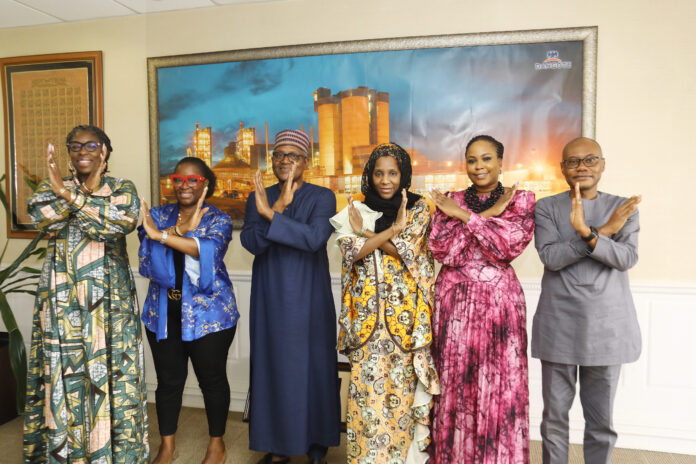 Dangote Group has reiterated its commitment to continue supporting all forms of investments that would help develop and empower the women personnel within the organisation in Nigeria and across its pan-African operations.

To commemorate the annual global International Women’s Day (IWD), Dangote Group, through the Dangote Women’s Network (DWN) celebrated the various outstanding contributions of its female workforce while hosting all its members of staff across Africa to collectively mark the 2022 IWD celebration titled: “BreakTheBias”.

International Women’s Day, celebrated yearly on March 8 since 1911, has become a day set aside for companies to celebrate the social, economic, cultural and political achievements of women, while speaking out against inequities including gender-based violence and workplace discrimination.

Speaking at the opening of the virtual event, President/CE of Dangote Group, Aliko Dangote described “BreakTheBias” as “the start for a gender-equal world. A world free of bias, stereotypes, and discrimination; one that is diverse, equitable, and inclusive.”

According to him, “#BreakTheBias is not a slogan but a continuous fight to eliminate gender discrimination, social, cultural, religious or other forms of deliberate or unconscious bias stereotypes that hinder women from fulfilling their potential.”

Dwelling on his personal experience, Dangote revealed, “I personally understand the value of women and the power of having them involved in all aspects of business, including the boardroom. I have always been a champion of women’s empowerment. I am sure that it stems from being raised by a strong Mother, who taught me about business and philanthropy.

“I am also the father of three women, and grandfather to four girls. I have seen what they can do when given equal access to opportunities. My three daughters, Mariya, Halima and Fatima are all senior executives at the Dangote Group, and I can tell you they are critical to the success of our business. They have challenged, pushed, and made me a better leader. They are not alone in the Dangote Group. We have a strong bench of women leaders across the Group. Our focus is on skills, productivity, and ability to deliver on given assignments. I am confident that they will help drive the organisation through its next stage of growth.”

He disclosed that the company is working hard to completely eliminate any bias against women. “Within the Dangote group, I am proud to say that women are taking up topmost responsibilities and are doing very well in contributing to the rapid growth and expansion of our conglomerate across Africa. I will continue to support women and depend on their tremendous potential to transform the organisation and societies in positive ways”, he said.

Group Managing Director, Dangote Industries Limited, Mr. Olakunle Alake, said the theme of this year’s IWD celebration “BreakTheBias” is an inspiration to women and young girls all over the world.

According to him, equal education opportunities remain one of the foundational steps in promoting a world free of bias. “The female child should be given equal opportunity while growing up and made to understand that she is not inferior to the male child. She should be encouraged to always put her best foot forward, and that there is no barrier against her ambitions,” he said.

Non-Executive Director, Dangote Cement and Matron, Dangote Women’s Network, Halima Aliko-Dangote, said the International Women’s Day provides a useful opportunity to reinforce the fact that everyone has a role to play in forging a more gender-balanced world.

Halima said, in its effort to ensure women empowerment within and outside the organisation, the company launched the Dangote Women’s Network in 2016 to support the growth of women in the organisation and to serve as a place for them to share experiences and interact.

According to her, since the establishment of the network, the group has recorded tremendous growth in just six years. “From empowering and collaborating as a community (charity walk where we raised over N20 million for Internally Displaced Persons in Borno State), donating food, clothes and sanitary products to the less privileged across our Pan African countries (including Nigeria), to changes in policies that protect, support and enable our women to thrive,” she added.

Moderating a special panel session with focus on gender bias and possible solution to it, Managing Director, Aliko Dangote Foundation, Zouera Youssoufou said Dangote Group has increased its female representation on boards, executive committees, and senior management and is committed to have one of the most gender-balanced senior management team among all its businesses.

Speaking during the panel session, Managing Director and Head of Sub-Saharan Africa (Ex-RSA), Bank of America Merrill Lynch, Mrs. Yvonne Ike Fasinro, commended the Dangote Group for its efforts in having a more gender-inclusive workplace. She stressed the need for women to develop confidence in themselves and be ready to speak out when necessary.

Fasinro also emphasised the need for women in senior cadre to pull others along in the development of their career path.

Also, Special Advisor to President Muhammadu Buhari on Social Investments, Hajiya Maryam Wali-Uwais urged women to pay special attention to their mental health. “Mental health is a serious concern for all women who strive to be at the top of their game in an organisation. Trying to balance family and work may have serious impact on their mental health. They need to create time for leisure as a way of protecting their mental health.”

Senior Advisor to the Dangote Group President, Fatima Wali Abdurrahman, said that Dangote Group has done so much in breaking bias, and urged women to support each other in career development.

Speaking on her experience over the years in her career, Group Executive Director at the Dangote Group, Dr. Adenike Fajemirokun, urged women to eliminate bias against one another. She said that most bias that she has encountered so far came from fellow women, therefore the need for women to support one another.

Speaking at the end of the event, Group Chief Human Resources Officer at Dangote Industries Limited, who is also an Advisory Board Member of Dangote Women’s Network, Mrs. Nglan Niat said the Human Resource Department of the company is involved in raising greater awareness on gender issues.

She stated, “We are reviewing our retention and succession plans, ensuring we include our women in our talent pool and in addressing the skills gap to provide more opportunities.” She commended the speakers and colleagues who made out time to attend the event to commemorate the celebration of the International Women’s Day.