Home Corporate News Ronaldo And Coca-Cola: How Starpower Can Make, Unmake A Brand 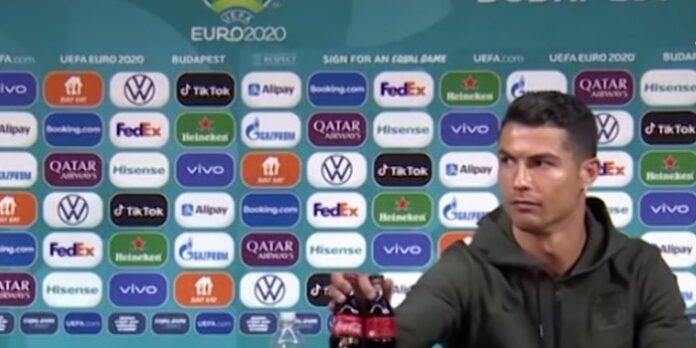 Coca-Cola, a beverage brand, has been caught in the heat of market dynamics caused by a simple gesture from Cristiano Ronaldo, a Portuguese professional footballer who plays for Juventus.

Ronaldo, on Monday, June 14, 2021, in a clip that has since gone viral on social media, swapped a bottle of Coca-Cola for water. This happened as the soccer star sat down for a press conference at the European Championship.

Just before the media parley, he pushed aside two Coca-Cola bottles placed in front of him, after which he said “Água,” a Portuguese word. He, thereafter picked up a bottle of water and seemingly encouraged others to do the same. “No Coca-Cola,” he added.

This incident, however, highlights the influence of certain individuals on a brand or business ecosystem as the case may be.

One would wonder what Elon Musk, Don Jazzy, and Wizkid all have in common with Ronaldo who by a simple gesture made one of the world’s most popular beverage drinks record billions of dollars loss, in a matter of minutes. But in all fairness, they’ve all been endorsers or spokespersons for brands or causes.

The aforementioned superstars are authorities in their fields, hence their influence and affluence on consumers. This alone is what determined investors’ confidence in any given situation.

As also seen in the case of Musk, a South-African-born American billionaire, who with a single tweet disrupted the cryptocurrency industry.

Unmask NG would recall that on Thursday, May 13, 2021, the cryptocurrency sector suffered a massive blow, after the Tesla founder suspended the purchase of his electric vehicle products with bitcoin. Following the suspension announcement, billions of dollars were wiped out from the cryptocurrency market, leaving investors and traders in panic.

As at the time Musk made the announcement, the value of the whole cryptocurrency market stood at around $2.43 trillion. This was according to data from Coinmarketcap.com.

The market capitalisation first dropped to around $2.06 trillion, wiping off around $365.85 billion.

Sharing his sentiment on how starpower can disrupt a business ecosystem, Charlie Higgs, an analyst at Redburn, Europe’s largest independent equities broker, stated: “Aligning brands with celebrities is a tried and tested way of recruiting new consumers, but it comes with added risk. This risk is persistent and larger now than ever before thanks to the prevalence of social media.”