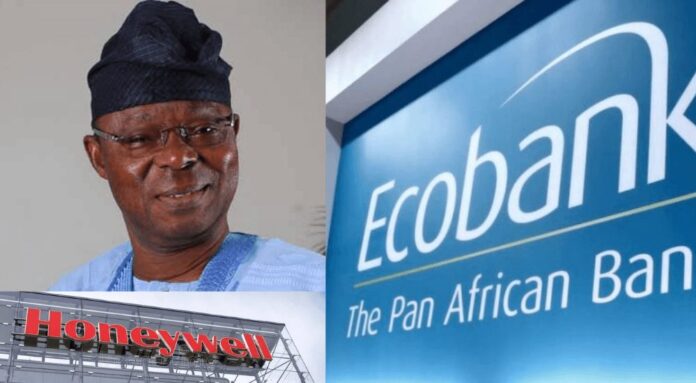 According to the financial institution, purchasing an equity stake in Honeywell Flour Mills Plc is too risky considering the fact that Honeywell Group Limited, the parent firm, had not been paying up its loans.

Unmaskng.com understands that Ecobank and Honeywell have a legal battle ongoing over a N3.5 billion debt the former alleged that the latter owed it.

However, following the disclosure that the establishment of Honeywell Flour Mills Plc (HFMP), a portfolio company of Honeywell Group Limited, would soon be concluded, Ecobank advised Flour Mills to not consider doing business with the former.

In a statement signed by solicitors to Ecobank, Kunle Ogunba and Associates, and addressed to the Managing Director of Flour Mills of Nigeria, the financial institution cautioned the public and corporate bodies on the “danger inherent in dealing in any shares of the company.”

The bank said due to the failure of the company to liquidate the said loan facilities, it was constrained to commence winding up proceedings against Honeywell Group Limited at the Federal High Court, Lagos in suit no: FHC/L/CP/1571/2015.

The statement read: “However, while the said action was dismissed at the Federal High Court and the Court of Appeal, it is pertinent to state that an appeal with appeal no: SC/700/2019 has been filed challenging the said decision at the Supreme Court (Notice of Appeal is herein enclosed and marked as Annexure C).

“Hence, the effect of the above is that there is currently a winding-up action/proceeding pending against the said Honeywell Group Limited.”

The bank quoted a provision of Section 577 of the Companies and Allied Matters Act 2020 as saying, “Where a company is being wound up by the court, any attachment, sequestration, distress or execution put in force against the estate or effects of the company after the commencement of the winding-up is void…”

This, according to Ecobank, restricts Honeywell Group from proceeding with the sale of Honeywell Flour Mills to Flour Mills of Nigeria.

It added, “Consequently, we hereby demand that Flour Mills of Nigeria Plc, in its best corporate interest, immediately cease and desist from consummating the subject transaction, which aims to divest the assets of a company being wound up (Honeywell Group Limited).

“Please be further informed that the assets of both Honeywell Group Limited and Honeywell Flour Mills Plc. are the subject of the winding-up action and thus based on the doctrine of “lis-pendens” (in addition to the provisions of CAMA supplied above) you are advised to refrain from dealing with the subject asset which forms part of the subject matter of litigation.”

What you should know about Honeywell and Ecobank’s legal tussle

Following protracted negotiations between the parties, they both reached an agreement that Honeywell would only pay the sum of N3.5 billion as its final settlement of the total liability of all three companies.

According to a report, both parties agreed in July 2013 that Honeywell would pay the sum of N3.5 billion in full and final settlement of the indebtedness of the 3 companies stated above. This agreement was reached between representatives of both entities at the most senior Management level (including Ecobank’s Managing Director and Company Secretary), and was re -confirmed by the Bank in meetings and correspondence with Honeywell.

In January 2014, Honeywell fulfilled its commitment to the agreement by paying the N3.5 billion as the final settlement of the facilities, which Ecobank acknowledged. But surprisingly, 11 months after that, Ecobank came out to say the money paid was only a part payment to what the Fast-moving consumer goods (FMGC) owed.