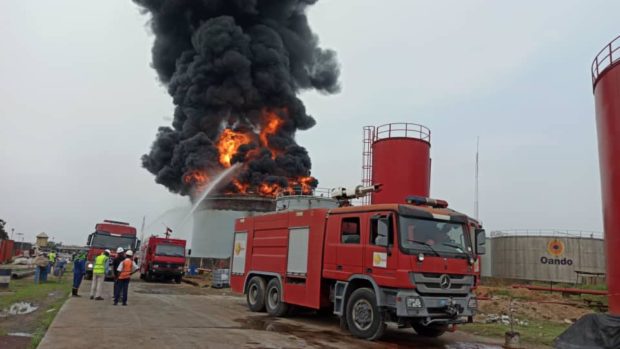 Unmask NG learnt that the incident happened at Ijora Badia area of Lagos.

Confirming the incident, Olufemi Oke-Osanyintolu, the Director-General, Lagos State Emergency Management Agency (LASEMA), said emergency responders, had been deployed in the area to salvage the situation.

“There is a fire incident at the tank farm at Oando Depot in Ijora Badia. The agency has activated its emergency response plan and all relevant stakeholders have commenced appropriate measures to combat the flames and prevent secondary incidents;

“Lagosians are urged to remain calm. Further updates will be communicated,” he stated.

“Safety remains our priority at OVH Energy as we operate under high safety standards to curb incidences of fire outbreaks as well as other health and safety risks from happening at any of our stations,” the firm stated.

While efforts were ongoing to put out the fire, Unmask NG, at the time of filing this report, could not establish the cause of the inferno.

Ladies Are Not Allowed To Enter This Restaurant, Here’s Why