Home Corporate News Emir of Kano, Ganduje, Others Hail Dangote For His Contribution To Nigeria’s... 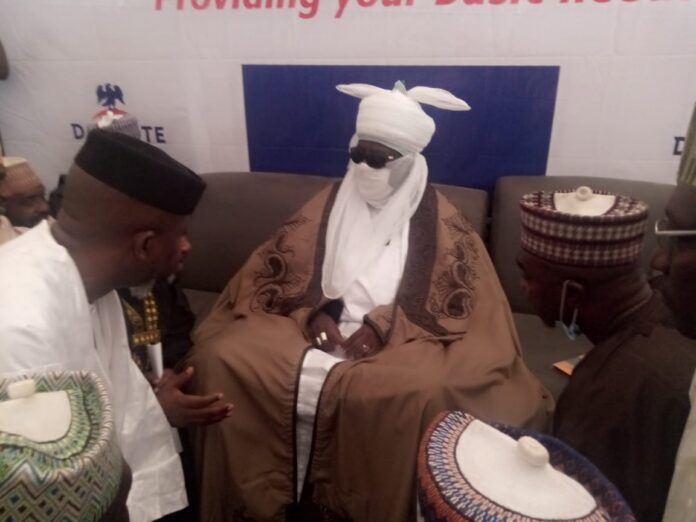 The Dangote Industries Limited weekend buoyed its catalogue of approval rating with the commendations from Emir of Kano, Aminu Ado Bayero, and the Kano state governor, Abdulahi Umar Ganduje, both of whom lauded the contributions of the pan-African conglomerate to the economic well-being of Nigeria.

Emir Bayero, who visited the Dangote pavilion at the ongoing Kano International Trade Fair and was visibly elated by the company’s profile, had in his entourage Council members of the Kano Chamber of Commerce, Industry, Mines and Agriculture (KACCIMA) as well as other traditional rulers in the state.

The Emir also commended the Kano Government, the KACCIMA, and other participating companies in the 42nd Kano International Trade Fair which will close on Saturday, December 11, 2021.

Emir Bayero said he is very happy with Dangote Group even with the world-class Refinery currently under construction saying the project is timely given the challenges the country and businesses are facing.

According to him: “We have visited the Trade Fair, and we are happy with development so far despite the economic situation around the world. May Allah support our effort.”

The Governor who was represented by the Commissioner of Commerce and Industry, Ibrahim Mukhtar said the contributions of Dangote to Kano and indeed Nigeria, in the areas of industrialization and job creation, cannot be quantified.

Speaking earlier, during his own visit to the Dangote pavilion, Ugandan Envoy to Nigeria, Ambassador Nelson Ocheger, described Dangote as an ‘African jewel’ and an institution, whose indirect support to African political leaders in the areas of job creation and industrialization are impacting positively on peace and stability on the continent.

President of KACCIMA, Dalhatu Abubakar, described as apt the theme for this year’s 42nd Trade Fair, which is: Consolidating the Challenges of Covid-19 pandemic to opportunities growth and development of micro, small and medium enterprises in Nigeria.

Deputy President and Chairman of Trade Fair Committee, Uba Tanko Mijinyawa said the Dangote Group has been a partner all through, even as he extolled its charity works through the Aliko Dangote Foundation(ADF).

Speaking to newsmen, the Director-General of the KACCIMA, Mustapha M. Aliyu commended the Dangote Group for the partnership and sponsorship of the Trade Fair.

He described the relations between the duo as mutual and supportive. “We appreciate his efforts and support to the socio-economic growth of Africa,”  the Director-General added.

A statement from the Dangote Group said companies participating under the Dangote Industries Limited are: Dangote Cement, Dangote Sugar, NASCON, and Dangote Fertiliser even as it disclosed that the company has slated Friday, December 10, 2021, for its Special Day at the Fair.

Dangote Group urged participants who seek to do business with any of the company’s subsidiaries, to avail themselves of such opportunities through Special Desks at its pavilion.

It described Kano State as one of its biggest markets in the country, adding that it has historically been a major trade route not only in Nigeria but in Africa as a whole.