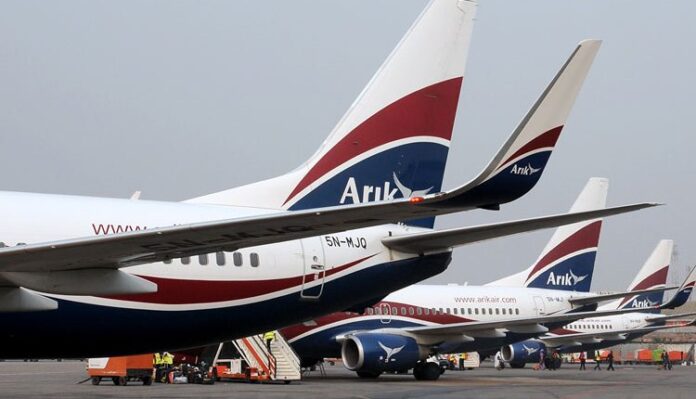 While making the disclosure, the airline’s Public Relations and Communications Manager, Adebanji Ola, in a statement said the company took the decision to downsize its workers due to the COVID-19 pandemic which has caused the airline a major setback financially.

The statement partly read: “Arising from the devastating impact of the COVID-19 pandemic, leading to the constrained ability of the airline to complete heavy maintenance activities and return its planes to operations, stunted revenues against increasing operational costs, the management of Arik Air (In Receivership) has declared 300 staff members redundant to its current level of operations.

“The leadership of the impacted unions has been contacted to negotiate a redundancy package for the affected staff.

“It is important to note that over 50 percent of Arik Air’s workforces of over 1,600 staff have been on furlough in the past six months on a base allowance.

“Decisions to let go of staff is naturally a difficult decision. Arik Air wishes the impacted staff well in their future endeavors.”

This line of action taken by arik airline has left many of their passenger stranded  at the airport as the National Union of Air Transport Employees (NUATE) blocked the entrance of the airline’s headquarter with placards and board.

While arik air may have retrenched over 50% of its workforce due to the economic downturn caused by Coronavirus, this publication understands that the official who was quoted in this report didn’t deny that the workers were retrenched, instead he maintains that redundancy packages would be provided for the affected workers.

But the reality is, yes! The coronavirus pandemic did hit the world hard but should that make organisation lose their humanity? Retrenchment is not a way to compensate workers who have risked their lives for the job.

Titanic Struggle Of The Apostles Against Stopping The Killing Of Twins By Oro Cult,...

Winner Walks Away With $5,000 At Nigeria, Ghana ‘Jollof Faceoff’ Competition

Media as the fourth estate of realm has its foundation on ethnics and ethos of journalism as a respected profession. It is rooted in...

BBNaija 2021 organisers have accused of unfair treatment against Pere. Following the live eviction show that was held on Sunday, September 26, 2021, there has...

Titanic Struggle Of The Apostles Against Stopping The Killing Of Twins By Oro Cult,...

Aiyetoro Community in Ilaje Local Government area of Ondo State is celebrating freedom of twins by the titanic struggle of their founding fathers -...

In recent times, there has been a surge in the number of fraudulent cases that have swindled thousands of people in billions of naira....

Winner Walks Away With $5,000 At Nigeria, Ghana ‘Jollof Faceoff’ Competition

The maiden edition of the ‘Jollof Faceoff’ competition took place on Saturday, July 31, 2021, at The Rooftop by Ohuru HSE, Boardroom Apartments, Lekki,...

COVID-19: Elemelu Has A Message For Investors