Home Sponsored news Titanic Struggle Of The Apostles Against Stopping The Killing Of Twins By... 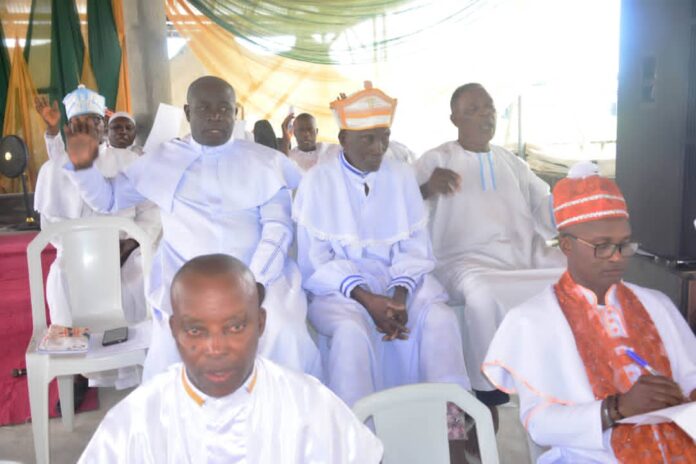 Aiyetoro Community in Ilaje Local Government area of Ondo State is celebrating freedom of twins by the titanic struggle of their founding fathers – ‘the Apostles’ against stopping the killing of twins by ‘Oro Cult’.

In Ilaje, especially Ugbo tradition, did not, until the first half of the 20th century, allow twins to survive longer than the days that they were born. As a matter of fact, they would be killed instantly. The authority that was responsible for the killing of twins was called “Oro cult”.

The movement of the Apostles to stop the killing of the twins in Ilaje land started in 1943. From 1943 to 1945, many of the Apostles were taken to court and prosecuted and sentenced to jail. However, in one of the court cases, the custodians of the Oro cult in Ilaje, who were the traditional chiefs both in Mahin and Ugbo kingdoms, denied the allegation leveled against them by the Apostles that they were killing twins and this gave the Apostles courage to pursue their missions.

They were born in 1945. And in line with the extant practice, they were taken into the bush and hidden for several days with their mother. And they successfully escaped to where the Apostles were securing and caring for them. Meanwhile, the father of the twins, Mr. Ejagbomo was a member of the Oro Cult who believed that the twins were children of abomination and should be killed. But their mother was a member of the Holy Apostle Church who did not believe in the killing of twins.

Aiyetoro is a community in Ilaje Local Government which is situated on the Atlantic coast and about seven miles away from the Mahin Lagoon. The community is often called, ‘the happy city’. It is inhabited by the members of the Holy Apostles’ Community Church. The town is run and administered on a communal basis. They are mostly Ilajes, most of the leading members came from Ugbo and Mahin. Due to religious differences with the native authorities, they went to establish and settle in the community. The economic life of the town was communistic in nature.

Aiyetoro community became one of the most civilized communities in the world because of their culture. In the community, they like to experiment and do something new, they live a good Christian life, established big factories, provided electricity, and do communal exploration of technical work. All members of the community felt that they would be able to keep abreast of development and become scientifically and technically equipped to take their place among the world’s leading communities.

They reportedly had a unique way of communal relationship which was akin to communism as practiced by the early Christians in the Bible. In Aiyetoro, these militant Christians ensured that there was public ownership of all investments. At that early part, there was no individual ownership of property. Their peculiar way of life and place of settlement was initially opposed by some powerful rulers in Ilaje land. It, however, took the intervention of the colonial authority through the secretary of Ondo Province to allow them to live as they deemed fit.

The people of Aiyetoro were reputed for their commercial living and advanced technology in fishing, transportation, industry such as carpentry and furniture, shoemaking, bakery, soap making, textile, and marine business.

The town was said to be so popular that it attracted the attention of Chief Obafemi Awolowo and the communist world in the 1950s, particularly the Union of Soviet Socialist Republics (USSR). Many students from Aiyetoro were educated through a bilateral agreement with countries like West Germany, Hungary, Austria, and the United Kingdom.

In Aiyetoro children were usually assigned to foster parents whom they lived with from the age of five or six. These foster parents were responsible for their training and behavior. Every man was regarded as a father to every child here. They saw themselves as very civilized. People came from far and wide to understudy how they did things there. Christianity played a vital role as the church leaders whom they referred to as the Holy Apostles placed more emphasis on the role of the Holy Spirit in directing their affairs. Although communism is no longer fully practiced in the community today, it still plays out in their day-to-day activities.