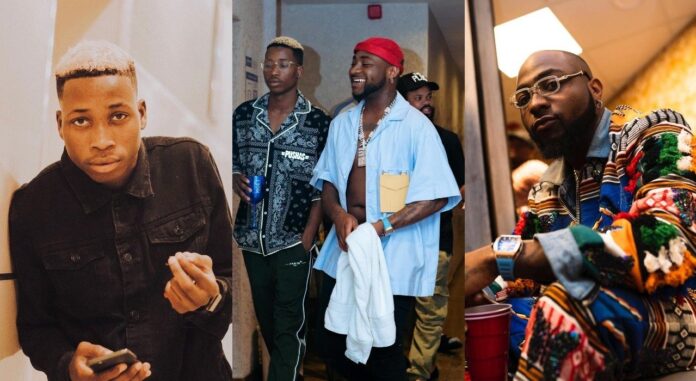 It all started yesterday (Monday, October 6, 2020), when Mayoks Michael, the manager and brother of Gift Camile, a video vixen, called out Lil Frosh and accused him of domestic violence against Camile, whom he claimed is his girlfriend.

Michael said Lil Frosh had been assaulting Camile for more than a year, adding that sometimes the singer would record her naked and threaten to share it on the internet after assaulting her.

“You have done enough damage for almost a year now you have been in a relationship with my sister and client and you have brought her nothing but horror, pain and disaster.

“I remember the first time I found out about you beating her on Monday 22nd of June @official_lyta team reached out to me wanting to use her for his music video shoot but she kept on saying you didn’t like it not knowing you had beaten her to pulp and she couldn’t face the world with so much Bruise. Their team begged to double the money but she couldn’t take the job because of you.

“You created so much fear in her till she turned down the job, but you still didn’t stop on a particular day you called me and you were begging me for almost 3 hours on the phone telling me to talk to her just to get back to you. I begged her and you promised never to lay your horrible hands on her.

“You broke her ring light. Broke her phone. Dragged her right in front of your house. I know how many times I’ve had to order Uber to take her home.

“@lhilfrosh you are very wicked. I’m tired of trying to protect your image while you continually ruin her and break her into pieces.

“She called one day crying that you were going to kill her and actually you were truly locking her inside preparing to beat not until I called her mom.

“You even recorded her naked! Threatening to post it after beating her bro @lhilfrosh you better be ready. You will pay for this !!! We are tired of your…”

In what Unmask NG thinks is a swift and smart response, Davido released a statement, where he disclosed that his record label contract with Lil Frosh as been terminated.

According to the Davido Music Worldwide (DMW) boss, Lil Frosh’s contract was terminated as internal investigation carried out at the top level of his record label proves beyond reasonable doubt that Lil Frosh is guilty as accused.

He however maintained that his brand does not condone the act of violence.

Davido’s statement read: “In the light of recent allegation made against Mr. Sanni Goriola Wasiu  AKA Lil Frosh we would like to state that as a record label, domestic violence is not a trivial matter and as such would not be condoned or supported. There is no excuse for the actions of Lil frosh and we understand that there’s nothing that can be said or done to revert the insensitivity shown.

“ Upon internal investigations carried out by the label, we are left with no option than to terminate the recording contract that exists between the label and Lil Frosh, effective immediately. We hereby immediately severe all affiliations with Mr Sanni Goriola Wasiu AKA Lil Frosh. Once again, we do not condone domestic violence and stand with all victims of domestic violence.”

Was the termination a smart move?

Domestic violence is a grievous crime that shouldn’t be condone in any form. Around the world today, domestic violence or assault against women is a serious crime. And it’s serious because it violates the fundamental human rights of women and often results in serious injury or death. Sadly, it often occurs when the abuser believes that abuse is an entitlement, and unlikely to be reported to relevant authorities.

In Lil Frosh’s case, Davido couldn’t allow the singer get away with the assault against Camile. This, Unmask NG, understands was due to its intensity and consequences.

With the calling out alone, the DMW brand had already been dragged into the mud, and it could have been worse for the record label in terms of losing fan base, and endorsement deals.

Understanding the consequence of doing business with an abuser, however, makes it difficult to disagree with Davido on the termination of Lil Frosh’s contract. Hopefully, this will serve as deterrent to other musicians who are engaging in similar acts.

Kunle Afolayan: I Fund Most Of My Movies With Bank Loans