Home Showbiz Revealed: This Is Why FG Handed Over National Arts Theatre To CBN 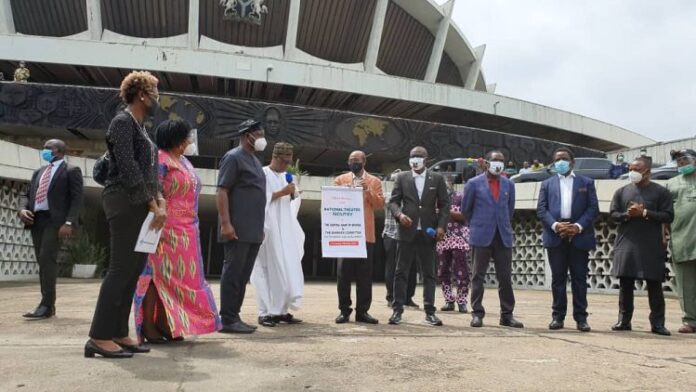 There is a reason as to why the Federal Government handed over the country’s National Arts Theatre to the Central Bank of Nigeria (CBN), and Bankers’ Committee, for renovation.

According to Lai Mohammed, the Minister of Information and Culture disclosed that the national edifice was handed over as a result of financial difficulty.

The minister maintained that the President Muhammadu Buhari-led administration, does not have the money to renovate the national theatre. Thus, the handing over became a neccessity.

In an interview with Radio Nigeria, Mohammed admitted that for over 43 years the national theatre has been suffering due to lack of funding from the government.

His words; “The handover of the national theatre to the CBN is one of the many steps by government to reposition the creative industry.

“For more than 43 years, there has been really no serious renovation as a result of lack of fund by the government and the edifice is in a sorry state. Several attempts to privatise or concession the edifice either before or during my tenure as minister has failed, and the truth of the matter is that government has no money to embark on the renovation.

“Therefore, when the CBN made the offer, we saw it as a golden opportunity to return the national theatre to its glory days.”

Unmask NG, in July 2020, reported that the national theatre had been handed over.

In what appeared to be a fraudulent move, the Federal Government has for the second time in less than a year, handed over the country’s National Arts Theatre to the CBN, and Bankers’ Committee, for renovation.

Prior to the latest handing over development, about nine months ago, precisely October 2019, the Federal Government handed over the National Theater, located in the Iganmu area of Lagos, to the CBN and Bankers’ Committee, for the same reason.

In a surprise turn of events, on Sunday, July 12, 2020, this same government repeated the same action, in a similar way.

This Is Why Oscars Considered Genevieve Nnaji As Voting Member

Assault: Davido Cuts Off His Business Relationship With Lil Frosh