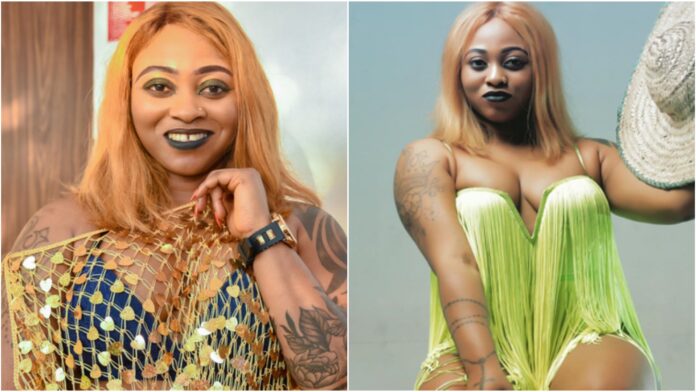 In chitchat with Unmask NG, where she discussed the business side of her art, the adult filmmaker explained that she does not only enjoy having sex with the light on, and camera capturing her intimate moment, but also to earn a living.

According to Uglygalz, there is so much money in pornography, and in view of that, she would always cheer up people to put it into consideration.

“I have met so many people, and they would always come to meet me to express their interest in adult films. I have spent over N500,000 on a shoot and some persons who participated in it later came back, and plead with me to take down the video. I lost money, amongst other things, in the process. One of my investors was very upset, and since that time, if people come to me and say they want to do porn, I would tell them that they have to do at least one, before bringing them on my set,” Uglygalz added as she recalled one of the encounters that left her disappointed.

When asked why she had not featured in Nollywood, the adult film actress said practitioners in the industry didn’t want to associate with her when she reached out to some of them for partnership.

“I have spoken to Nollywood actors and filmmakers about my interest to be part of their industry, but my efforts so far have not yielded results. In fact, while the men in the industry even field responses to my queries as it relates to my interests, the women just snubbed me and somewhat see me as undeserving,” she added.

More so, unlike other adult film actresses, Uglygalz would not feature in a shoot alongside an animal, like a dog.

In her words, “I once saw a video of a dog licking a girl’s p**sy. When I saw the video, I showed it to a few other persons, and they reacted differently. While some were like ‘eew’! I can never do this, other persons were like this is nice. And I asked myself that let’s forget the fact that it is an animal, when you watch this video, what would happen? So, after I asked myself that, I said if it wasn’t an animal or the idea that it was a dog, it looks appealing because it turns people on. There are so many people that would watch it and get definitely turned on, but as a person, I would not try it, but I can watch it. I will not let an animal go down on me.